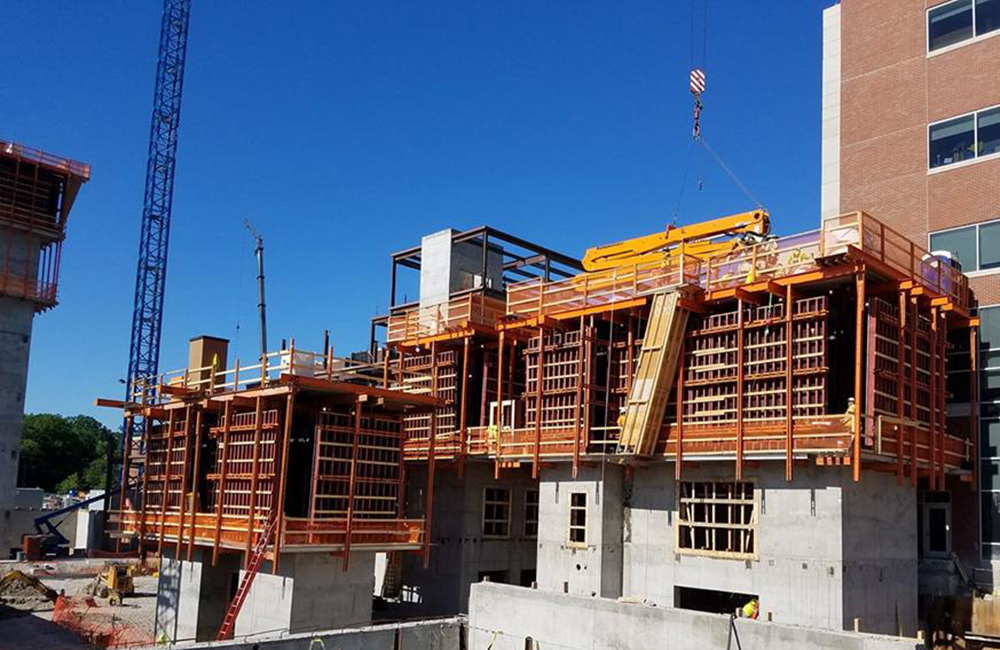 It’s no surprise that in the ever-changing world of commercial construction, companies continue to seek more effective and efficient ways of building. With the long-standing popularity of concrete as a core building material for vertical structures, many different methods have been employed by construction firms to attempt to maximize time and schedules.

In Toledo, Ohio, Granger Construction is utilizing an innovative method involving self-climbing formwork to help construct the eight concrete cores as part of the ProMedica “Generations of Care Tower” – the third largest concrete job in the company’s history. 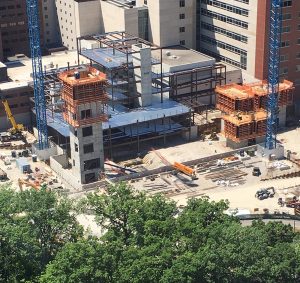 Climbing form is a special type of formwork most commonly used for large vertical concrete structures, such as shear walls or core lifts. Climbing formworks, which are hydraulically operated and typically contain space for crews and machinery, are used for structures that require seamless walls or have a repetitive form. These platforms allow for better work to be done at less risk, both for workers and the equipment.

“Self-climbing formwork significantly reduces necessary crane time,” said Robert Lange, project manager at Granger Construction. “Once assembled, the hoisting of the formwork is not required as it climbs itself up the core to pour. This frees up cranes on congested sites to allow following work to progress, thus accelerating overall project schedules.”

Typical formwork requires significant crane time to set and move. Unlike these more traditional methods, which require a crane or other supports for the framework, the self-climbing form allows the vertical and horizontal parts of a structure to be assembled concurrently, which minimizes labor time, results in less congestion on site, creates better productivity and allows high quality surface finishes to be achieved. It is also much easier to clean and reuse than other methods.

In recent years, the self-climbing method of concrete construction has become increasingly popular because the advanced method helps the structure elevate itself while creating better results in a more efficient manner. 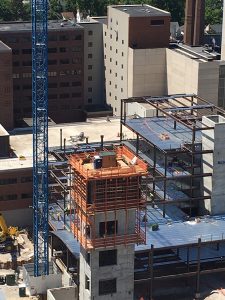 The climbing sequence begins by using the carriages on the platform to strip the formwork. The leading climbing shoes are then bolted to the anchors in the previous lift, and the hydraulic climbing mechanism raises the climbing rails on each platform to the shoes, where they automatically lock. After the unit has reached the leading climbing shoe, it is secured with a locking bar and the hydraulic system is disengaged. The pouring process then starts and the formwork is held in place until the concrete has been poured; then the forms are released and moved away from the wall. The rollers, powered by the hydraulic jacks, then lift the frame to the next level, and the formwork is positioned using the carriages. After that is steadied, the panels on the forms are closed and the process begins again.

Although the initial set-up costs of self-climbing formwork are often more expensive, it can have a significant impact on overall costs and schedule, particularly when constructing large vertical concrete structures such as elevator shafts.