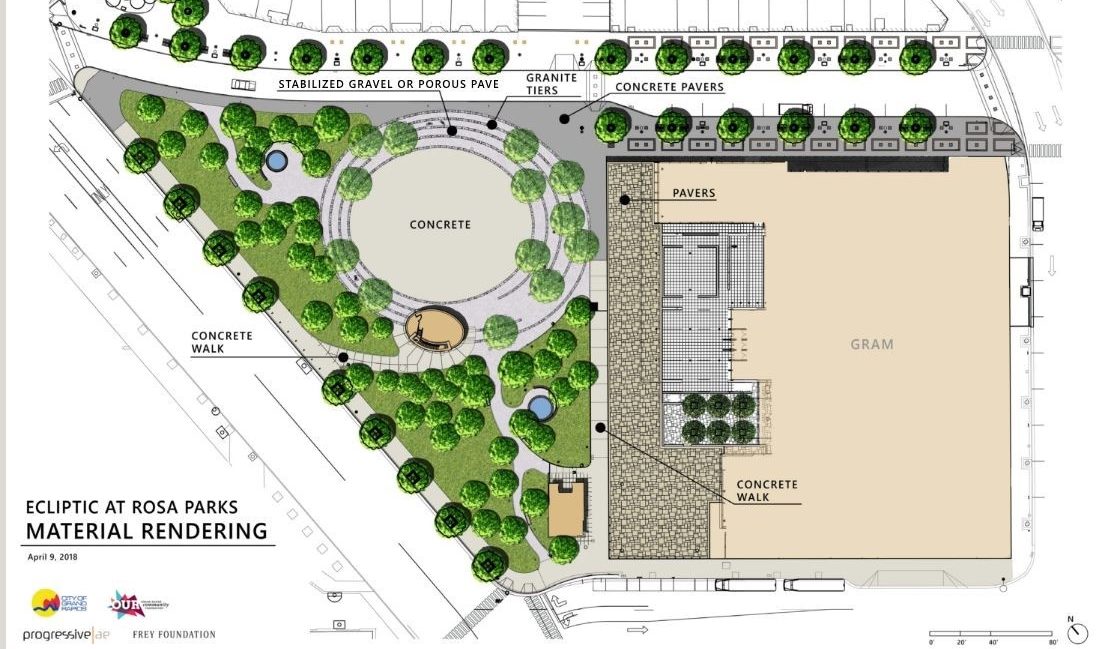 Monday, January 17, 2022 | As the City of Grand Rapids Rosa Parks Circle Improvements project nears completion, it seems fitting to share some history behind this space in honor of Martin Luther King Jr. Day.

Rosa Parks Circle (formerly “Monroe Mall Amphitheater,” “Grab Corners” and “Campau Square”) is over 150 years old. In its lifetime, this space has served Grand Rapids communities in many ways, including hosting numerous protests for social justice and civil rights. Today, the park is dedicated to longtime Michigan resident and civil rights leader, Rosa Parks, of whom there is a statue at the park’s entrance.

Rosa Parks is most notably known for refusing to surrender her seat to a white man in Montgomery, Alabama on December 1, 1955. Park’s act of courage sparked the Montgomery bus boycott, a 381-day civil rights protest led by Revered Martin Luther King Jr.

In 2000, Ecliptic by Maya Lin was dedicated at Rosa Parks Circle. Twenty years later, as part of an urban revitalization effort, the same noted artist and architect (whose other works include the Vietnam Memorial in Washington D.C.) was commissioned to reimagine the space. In 2021, Granger Construction joined Progressive AE on this project. The City of Grand Rapids established a goal of 50% MBE and MLBE subcontractor participation on this important cultural investment. Through partnerships with the Grand Rapids Chamber and West Michigan Minority Contractors Association, the team surpassed that goal, awarding 62% of contracts to MBE and MLBE businesses. Granger Construction is honored to be part of this team and looks forward to completion of this historic revitalization effort.

Employing a Culture of Wellness